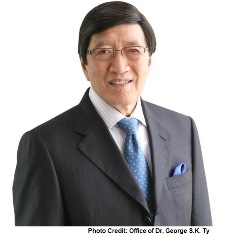 The Government of Japan announced on November 3, 2017 the conferment of The Order of the Rising Sun, Gold and Silver Star, on Dr. George S.K. Ty, Group Chairman and Founder of Metropolitan Bank & Trust Company (Metrobank), in recognition of his contribution to strengthening the economic relations between Japan and the Philippines.

As a major player in the Philippine banking sector, Dr. Ty has been instrumental in forging several cooperation initiatives with not only major financial institutions but also rural banks in Japan, thereby facilitating the entry of more Japanese investments including MSMEs into the Philippine market.

Having successfully steered the Metrobank Group and the GT Capital Holdings to greater heights for decades, Dr. Ty also took the lead in launching landmark joint ventures with many Japanese companies in several sectors.

In the Philippines, Dr. Ty has also served as Chairman of Metrobank Foundation, Inc., actively engaging in different advocacy programs in the fields of education, visual arts and healthcare.

The Government of Japan extends its sincere congratulations to Dr. Ty and his family on this conferment, and hopes that he will continue to take an active role in further strengthening close relations between our two nations.