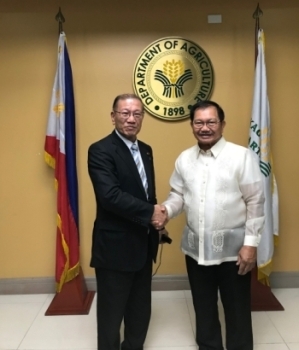 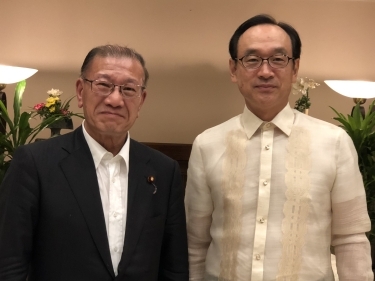 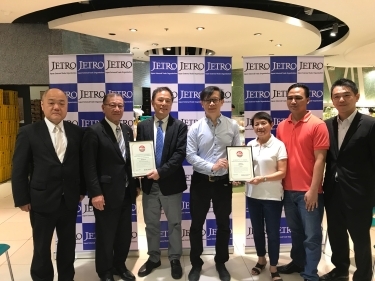 From May 31 to June 2, 2018, Mr. Mitsuhiro Miyakoshi, Special Advisor to the Prime Minister Shinzo Abe and in charge of promoting export of Japanese agricultural products made his official visit to the Philippines.

Mr. Miyakoshi had a meeting with Agriculture Secretary Emmanuel F. Piñol on the lifting of regulations of products from the Fukushima earthquake affected prefectures. As an example, he cited that the European Union lifted some regulations on these products based on comprehensive scientific data and analyses. Also discussed during the meeting were updates on rice production and harvest in the Philippines and Japan, as well as the latter’s possible development assistance in these areas.

Mr. Miyakoshi, together with Ambassador Koji Haneda, later on joined representatives of Japanese companies doing business in the Philippines to discuss ways to further promote exports of Japanese agricultural products. Mr. Miyakoshi underscored the importance of this matter to Japan, and that the Japanese Government is now exerting its best efforts to increase export in the nearest future.

The three-day visit coincided with the awarding of three Philippine-based enterprises by JETRO Manila (Japan External Trade Organization) for promoting Japanese products in their respective stores. Mr. Miyakoshi led the awarding ceremonies for these three companies, namely, the Manpuku Steakhouse for the Japanese Wagyu beef in their menu, second is Madison Square Marketing for promoting Japanese processed food products in the local market; and lastly, Landmark for partnering with Madison Square to retail Japanese food products in its store. The awarding was arranged and sponsored by JETRO and was held at Landmark Makati on June 1, 2018.

With the increasing demand for consumption of Japanese products in the country, the current goal of the Government of Japan is to achieve a total of one trillion Yen Japanese exports to the Philippines per year until the end of FY2019. Both the MAFF (Ministry of Agriculture, Forestry and Fisheries) and JETRO are working on several policies related to export promotion in order to facilitate the freer flow of Japanese products to the Philippines.