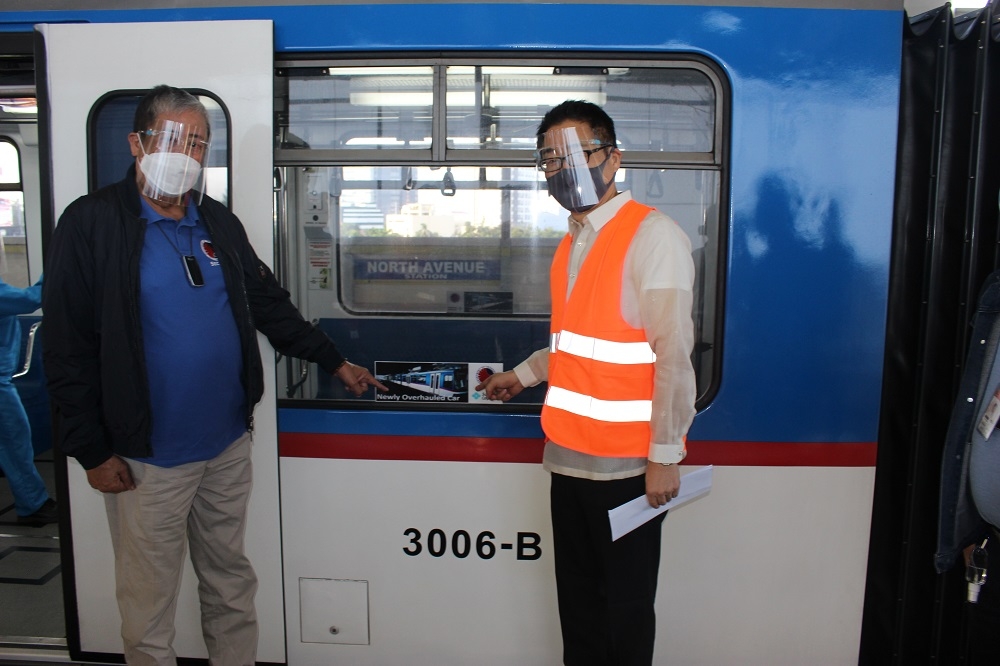 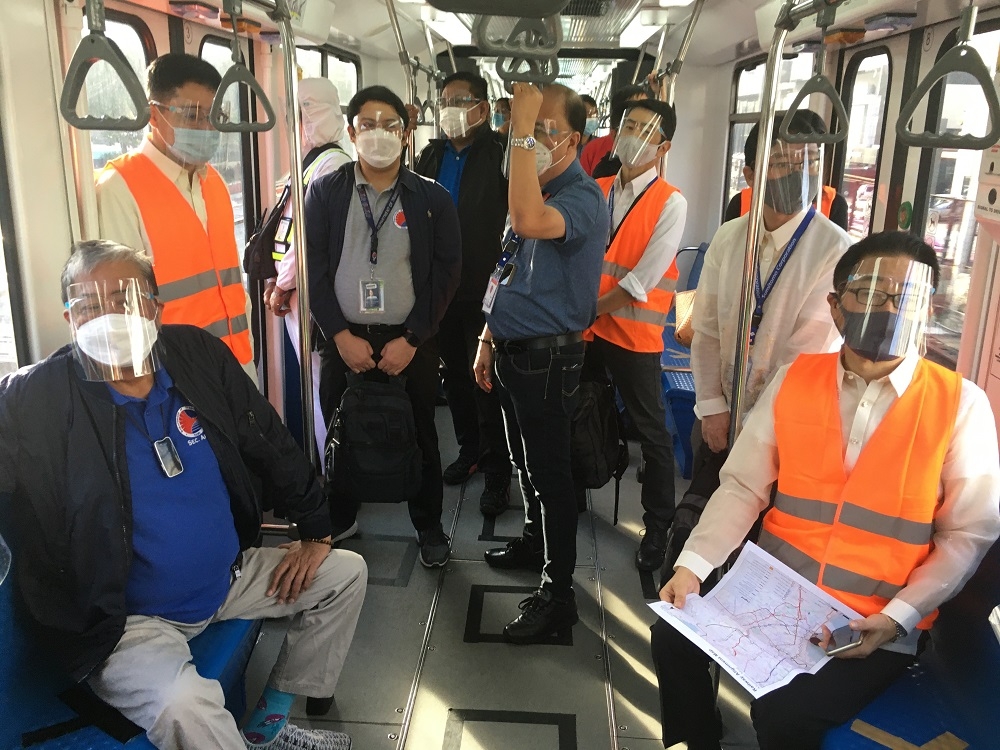 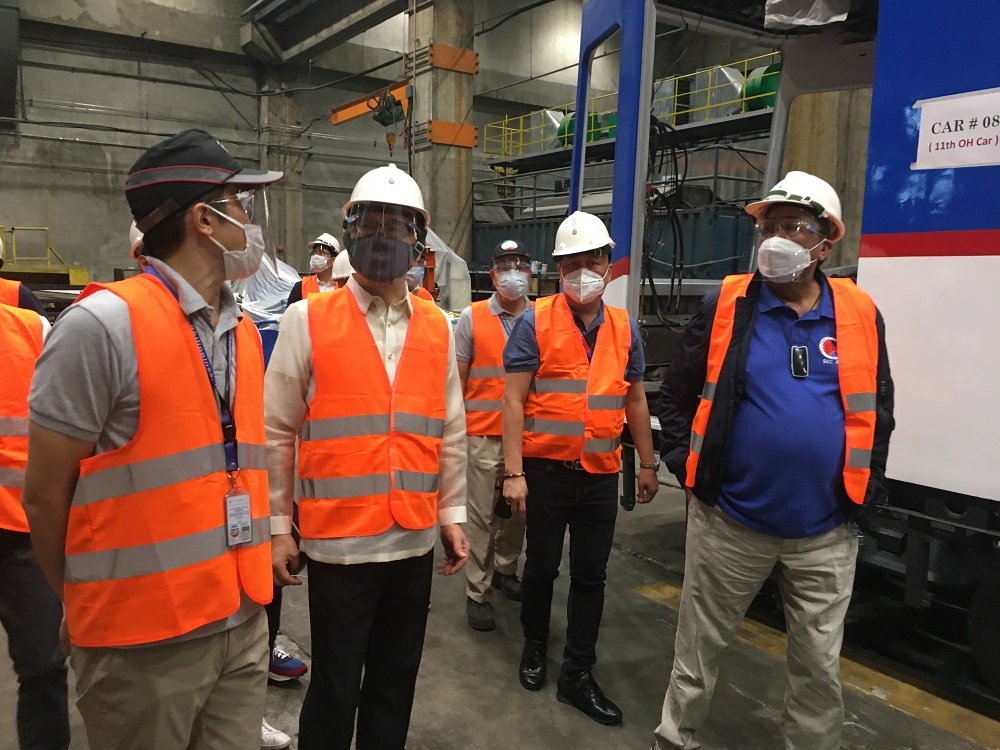 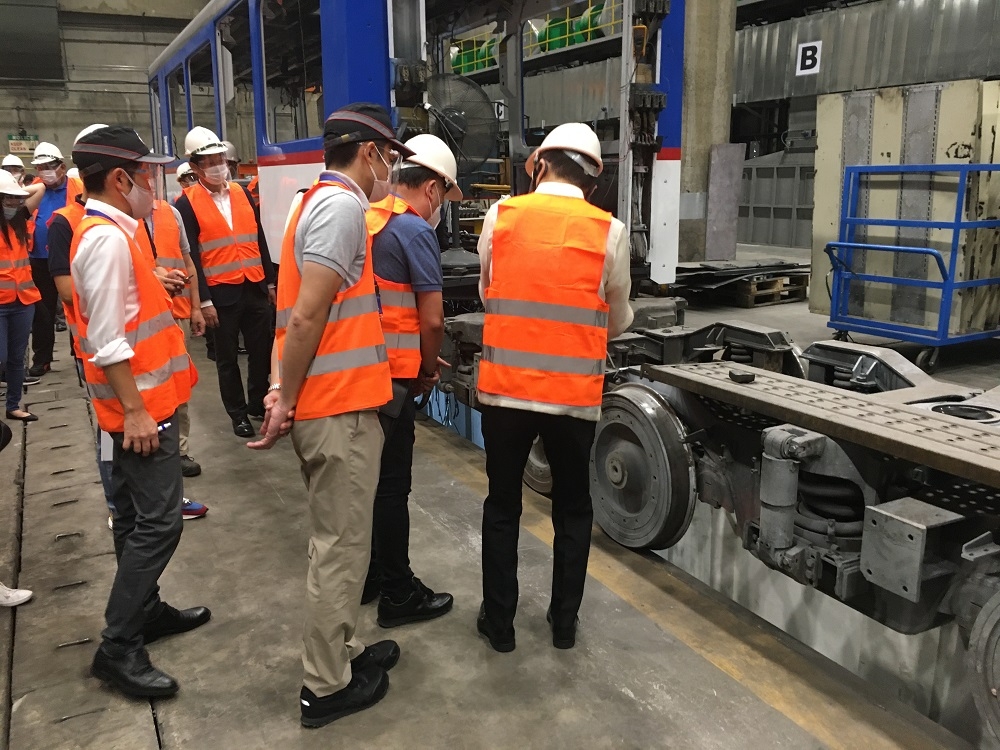 On 8 January 2021, Japanese Ambassador KOSHIKAWA Kazuhiko took a ride on the Metro Rail Transit Line 3 (MRT-3), together with Transportation Secretary Arthur Tugade. Their MRT-3 visit was executed while taking necessary precautionary measures against COVID-19. During their ride, Ambassador Koshikawa expressed enthusiasm over the MRT-3’s improved train speed resulting from rail replacement works, which were part of the line’s massive rehabilitation program implemented by Sumitomo Corporation-Mitsubishi Heavy Industries (MHI) from Japan.

“All aboard the newly-rehabilitated MRT-3 with @DOTrPH Sec. Tugade. Kudos to the MRT-3 workers for their great efforts! Hope this strong 🇯🇵&🇵🇭 partnership will result in safe and punctual transport services and make you set the alarm clock 30 min. later every morning!”

Ambassador Koshikawa also reaffirmed Japan’s commitment to bring development to the people of the Philippines by providing quality infrastructure assistance. He hopes to see more partnerships like this in the future, especially as Japan and the Philippines celebrates 65 years of Friendship in 2021.

On 7 November 2018, both governments signed and exchanged notes concerning the yen loan with provision of up to 38 billion yen for the Metro Rail Transit Line 3 (MRT-3) Rehabilitation Project upon the strong request of the Philippine government.
MRT-3, an elevated railway along EDSA - one of the busiest trunk roads in Metro Manila - has suffered from deteriorating track and trains caused by poor maintenance, resulting in the decline of its transport capacity and increased frequency of operation troubles. The MRT-3 Rehabilitation Project addresses that by improving the line’s safety, comfort and speed using Japanese expertise and technology.

On 30 April 2019, the MRT-3 Rehabilitation Project started with a partnership between Japan’s Sumitomo Corporation, its technical partner, Mitsubishi Heavy Industries (MHI), and MHI's fully-owned Philippine subsidiary, TES Philippines (TESP). Apart from being the original designer, builder, and maintenance provider of the MRT-3 for 12 years, Sumitomo-MHI-TESP has an extensive track record in railway engineering, construction, and maintenance, and is therefore the best fit for the challenging task of restoring MRT-3 to its design condition.

The MRT-3 was able to complete its rail replacement works in September 2020, several months ahead of the scheduled completion in February 2021.

On 7 December 2020, MRT-3 boosted its operating speed to 60 kph, cutting the average time between trains to only 3.5 to 4 minutes (20 trains at 60 kph) from the previous 8 to 9.5 minutes (20 trains at 30 kph). With this, travel time from North Avenue station to Taft Avenue will be shortened to only 50 minutes from the previous 1 hour and 15 minutes.