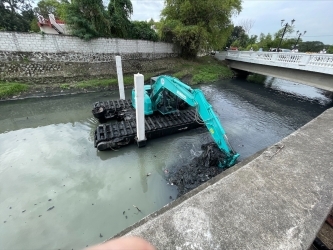 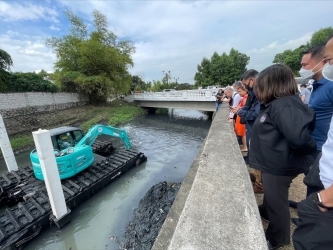 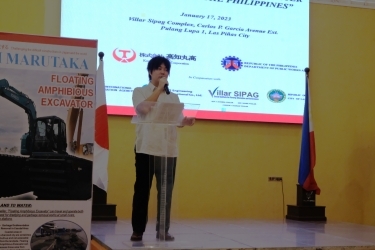 On January 17, 2023, the City of of Las Piñas launched an amphibious excavator in partnership with the Department of Public Works and Highways (DPWH), the Japan International Cooperation Agency (JICA) and the Villar Sipag Foundation.  The machine will remove accumulated garbage and silt from the narrow Las Piñas river to help improve its capacity to withstand floods.  Senator Cynthia Villar, Representative Camille Villar, Chairman Hiroshige TAKANO from Kouchi-Marutaka Co., Second Secretary Tomohiro MATSUBARA from the Embassy of Japan, and Project Formulation Adviser Takuya HASHIZUME from JICA attended the ceremony and observed the machine’s operation as part of JICA’s verification survey for the project “Utilization of Floating Amphibious Excavator for the Construction Works on Disaster Management and Disaster Restoration in the Philippines.”

According to Mr. Matsubara, the Government of Japan’s support to numerous countries has included the introduction of small-scale, innovative solutions to the problems of flood management and waste disposal.  He also assured that “Kochi Marutaka (maker of the amphibious excavator machine) is a well-known company in Japan for manufacturing useful and unique construction machines and facilities.”

As part of the project, dredging activities and garbage removal works will be conducted at two (2) proposed sites in Las Piñas City using the floating excavator machine. Unlike conventional backhoes-on-barges, the floating amphibious excavator can move freely on water and even cruise under low bridges to collect garbage and remove sedimentation, keeping waterways clean and prepared for the onslaught of floodwater during emergencies.