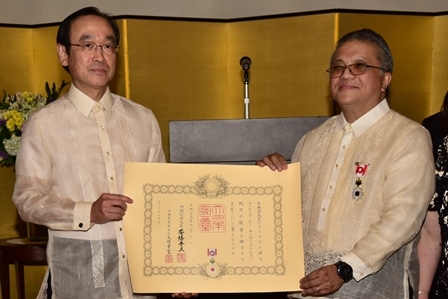 Mr. Philip B. Sanvictores, President of the Nihongo Center Foundation (NCF) and Trustee (and former President) of the Philippine Federation of Japan Alumni (PHILFEJA) has received the Order of the Rising Sun, Gold Rays with Rosette in a conferment ceremony held at the Japanese Ambassador’s Residence on Friday, February 9, 2018.

The award, conferred by Ambassador Koji Haneda on behalf of His Majesty the Emperor of Japan, was given in recognition of Mr. Sanvictores’ work and achievements in the development of Japanese language education and Japanese scholarship alumni affairs in the Philippines.

Mr. Sanvictores was a key figure in the establishment and subsequent growth of the Philippine Institute of Japanese Language & Culture in 1991 and the NCF in 1997.  In 2014-2016, Mr. Sanvictores served as President of PHILFEJA, the umbrella organization of the different groups of former Filipino students in Japan. In 2015, under his leadership, PHILFEJA hosted the 21st Conference of the ASEAN Council of Japan Alumni (ASCOJA), which is the largest gathering of former Japanese Government scholarship recipients from the entire region.  In January 2016, during the state visit to the Philippines of Their Majesties, the Emperor and Empress of Japan, Mr. Sanvictores has also helped put together the meeting of Filipino former students to Japan and Japanese government scholars with Their Majesties, which was among the highlights of the visit.

The ‘Order of the Rising Sun, Gold Rays with Rosette’ is among the highest honors awarded by the Japanese Government on behalf of His Majesty The Emperor of Japan. It is given to select individuals all over the world whose various efforts have contributed immensely toward the strengthening of relations between their respective countries and Japan. 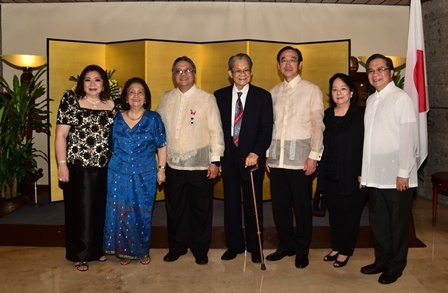 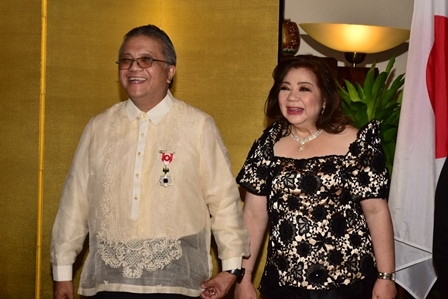