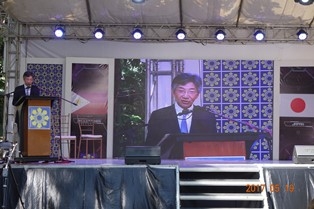 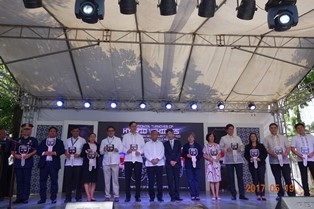 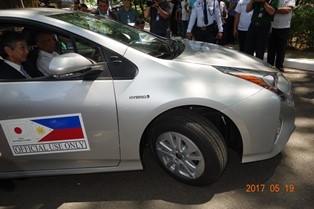 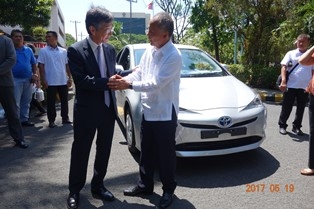 Japanese Ambassador Kazuhide Ishikawa attended the Ceremonial Turnover of the Next-Generation Vehicle Package under Japan’s Non-Project Grant Aid (NPGA) on May 19, 2017 at the Department of Energy Head Office.

The first batch of the package, a total of 24 units of next-generation vehicles, was handed over by the Japanese Government to the Philippine Government in the presence of Energy Secretary Alfonso G. Cusi and national government agency representatives.

Included in the 500-million yen package are 77 units of hybrid technology vehicles, 4 units of plug-in hybrid electric vehicles and 4 units of electric vehicles with charging station, which will all be delivered in three batches. These vehicles will be provided to selected Philippine national government agencies and PNP precincts in both Metro Manila and Region 8 in support to the promotion of next-generation vehicles in the Philippines, as well as to the emergency response operations and rehabilitation efforts of areas along the path of Typhoon Yolanda.

Reaffirming Japan’s commitment to further expand cooperation with the Philippines, Ambassador Ishikawa emphasized in his speech that the use of eco-friendly vehicles among government agencies is a very good opportunity for the Philippine Government to set a precedent for the private sector to follow.

The Philippines has long been one of the beneficiaries of the NPGA. Initiatives under this grant facility seek to assist developing countries through the provision of foreign currency funding for the importation of goods that make use of Japanese technologies in addressing a specific economic or social need.