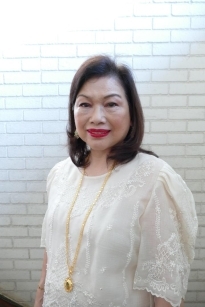 The Government of Japan announced on May 21, 2019 the conferment of The Order of the Rising Sun, Gold and Silver Rays on Ms. Ma. Elena Laurel Loinaz in recognition of her contribution to promoting mutual understanding between Japan and the Philippines.

Ms. Laurel Loinaz served as President of the Philippines-Japan Ladies Association (PJLA) for 13 years. Under her stewardship, the PJLA undertook various educational and socio-cultural programs to encourage exchanges between Filipinos and the Japanese. By making the activities of the Association more open, she invigorated them and expanded the participation of PJLA members and non-members.

The Embassy of Japan extends its sincere congratulations to Ms. Laurel Loinaz and her family on this conferment, and hopes that she will continue to play an active role in further strengthening close relations between our two countries.