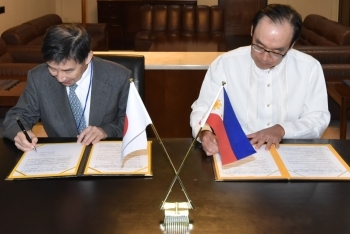 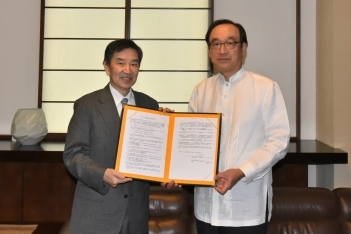 On March 4, 2020, Japanese Ambassador HANEDA Koji signed a grant contract (Project for Commercialization of Japanese Quality Strawberry and Promotion of Agri-Tourism in Highland) at the Embassy of Japan with Mr. GOTO Yorihisa, Chairperson of Ikaw-Ako, a Japanese non-government organization (NGO) conducting activities in the Philippines.

This project aims to commercialize strawberry cultivation and encourage farm tourism in the village of Patag, Silay City, Negros Occidental. To help reduce the increasing poverty in the area, this project will lay out an income option for the residents by utilizing Japan's strawberry cultivation technology and expertise on the operation of farms focusing on agri-tourism.

A total amount of US$ 213,832 (approximately 11 million pesos) is funded for this venture through the Grant Assistance for Japanese NGO Projects, a small-grant funding program of Japan’s Official Development Assistance (ODA). The Grant Assistance for Japanese NGO Projects started in the Philippines in 2002. Since then, the Japanese Government has made contracts for 52 projects in the Philippines under this scheme, amounting to approximately 1.2 billion yen in total. Japan believes that this project will not only strengthen the friendship between the peoples of the Philippines and Japan, but also bolster the existing strategic partnership between the two countries.