Top > 65 Years of Friendship: Japan and the Philippines

65 Years of Friendship: Japan and the Philippines 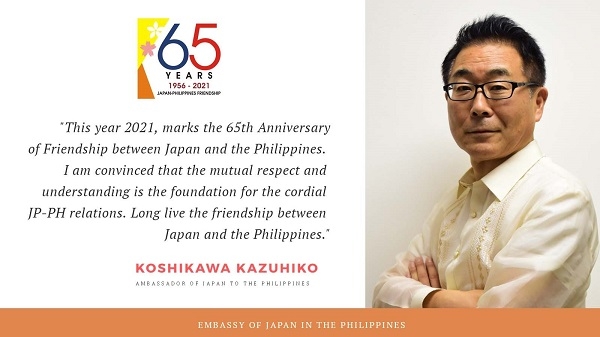 This year, 2021, marks the 65th Anniversary of Friendship between Japan and the Philippines. It is a meaningful year for both our countries as we celebrate decades of solidarity, trust and mutual understanding. May the ties that bind our countries be stronger and brighter in the years ahead!

To celebrate this momentous occasion, the Embassy of Japan in the Philippines prepared a series of programs meant to further enhance our people-to-people relations – the core of our outstanding bilateral relations.

Messages from our Leaders

Honoring the milestones of the last 65 years, Japanese Prime Minister SUGA Yoshihide and Philippine President Rodrigo DUTERTE conveyed their special messages to commemorate this very special occasion. Watch the messages of our leaders as we look back and ahead of the wonderful friendship Japan and the Philippines have built and fortified.

Click the links below for more information about the video messages.

Greetings from Our Dear Friends

Our celebration has been made even more special, courtesy of our dear friends that bring Japan and the Philippines closer than ever! We are pleased to share our compilation of their video and photo well-wishes, as featured below.

Ambassador KOSHIKAWA Kazuhiko took the time to answer some of the most endearing questions from adorable Filipino kids in “Hello! Japan Special ~Kids Ask Ambassador Kaz!~” This three-part question-and-answer series featured select Filipino children as they asked questions on anything about Japan and about “Amb. Kaz.” All episodes are available for viewing below.

Our friends from the Japan Air Self-Defense Force (JASDF) and Colegio de San Juan de Letran celebrated with us and exchanged exciting perspectives on the deep ties between Japan and the Philippines. Major MIZUNO Masaki, Commander of the C-130 unit of the JASDF, answered questions from young Letranites in "Hello! Japan Special ~Japan Airmen Answer Letranites~”. This three-part question-and-answer series features an exciting glimpse into the world of the C-130 Unit of the JASDF, Humanitarian Assistance and Disaster Relief (HA/DR), and more. All episodes are available for viewing below. 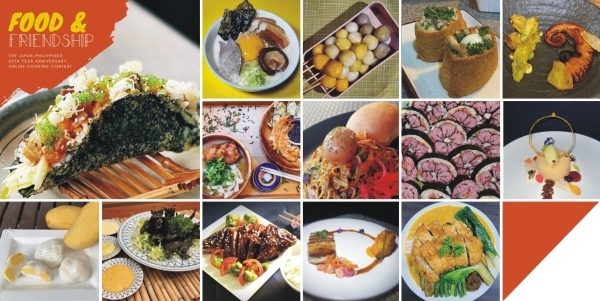 Food and Friendship: The Japan-Philippines 65th Anniversary Online Cooking Contest is an online competition that features photo and video entries of Filipino-Japanese fusion dishes from Filipino food enthusiasts. It is part of the year-long celebration of the 65th anniversary of the normalization of bilateral ties between Japan and the Philippines.

Click here to view the winning entries for both rounds of this contest!


The Tomodachi Podcast is a series of one-hour episodes that discuss personal narratives of past and present Filipino scholars in Japan through an entertaining and educational repertoire of guests and personalities. Scheduled to air every last Saturday of each month until December 2021, the podcast is a collaborative effort between the Japan Information and Culture Center (JICC) of the Embassy of Japan in Manila and the Philippine Association of Japanese Government Scholars (PHILAJAMES) National Chapter to celebrate the 65th Year of Japan-Philippines Friendship.