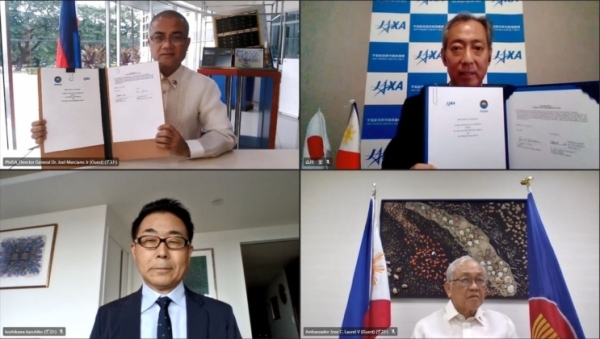 On June 11, a signing ceremony was held online between the Japan Aerospace Exploration Agency (JAXA) and the Philippine Space Agency (PhilSA) to solidify the first memorandum of cooperation between these two institutions. JAXA President Hiroshi Yamakawa and PhilSA Director General Joel Joseph Marciano attended as signatories to the agreement. Ambassador Kazuhiko Koshikawa was also present to witness the occasion, as well as Philippine Ambassador to Japan Jose Castillo Laurel V. For PhilSA, which was established in 2019, it is the first memorandum of cooperation with an overseas space agency.

Even before PhilSA was established, JAXA has been cooperating with universities and research institutes in the Philippines with isolated projects such as use of satellite observation data in the field of disaster prevention, launching Philippine micro-satellite with the H-IIA rocket and the deployment of micro-sat from International Space Station Japan Experimental module "KIBO" to satellite orbits. The signing of this formal MOC between JAXA and PhilSA will establish the comprehensive cooperation framework and is expected to further promote and expand Japan-Philippines cooperation in the entire space development field.