Top > Turnover Ceremony for “The Project for Construction of Classrooms for Leuteboro National High School in Socorro, Oriental Mindoro”

Turnover Ceremony for “The Project for Construction of Classrooms for Leuteboro National High School in Socorro, Oriental Mindoro” 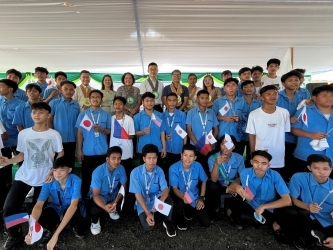 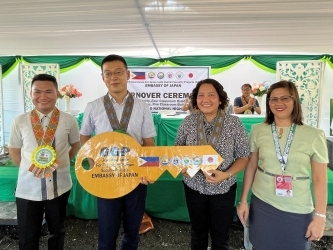 On 14 November 2022, the Embassy of Japan in the Philippines formally handed over a total of nine (9) new classrooms to the Leuteboro National High School in the Municipality of Socorro, Oriental Mindoro. First Secretary KANNO Chihiro of the Embassy of Japan led the ceremonial turnover, together with Socorro Mayor Nemmen O. Perez, M.D. and other LGU officials. 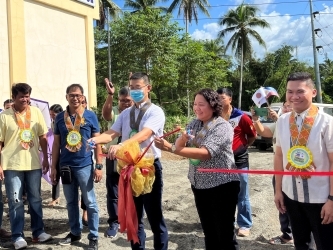 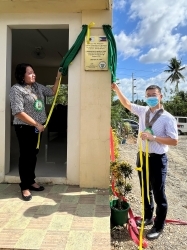 Funded through the Grant Assistance for Grass-Roots Human Security Projects (GGP), as part of Japan’s Official Development Assistance (ODA), “The Project for Construction of Classrooms for Leuteboro National High School in Socorro, Oriental Mindoro” aimed to address the issue of classroom shortage of the said public High School. The significant increase of enrollees in recent years resulted in the shortage of classrooms available to students. The school had to split classes into shorter sessions and use temporary makeshift classrooms in the gymnasium and offices. With such strategy, however, the provision of a safe and conducive learning environment for the students was compromised.

During the ceremony, First Secretary KANNO Chihiro of the Embassy of Japan shared his excitement in seeing the smiling faces of students as they return to their new and safer classrooms. He expressed his hope that these classrooms will enable the students to have better learning experiences to further develop their skills and potentials.

As the top ODA donor for the Philippines, the Government of Japan launched the GGP scheme in the Philippines in 1989 to reduce poverty and help various communities engage in grassroots activities. At present, 553 grassroots projects have been implemented by the GGP. Japan believes that these projects will strengthen the friendship between Japan and the Philippines and contribute to sustaining strategic partnerships between the two countries.